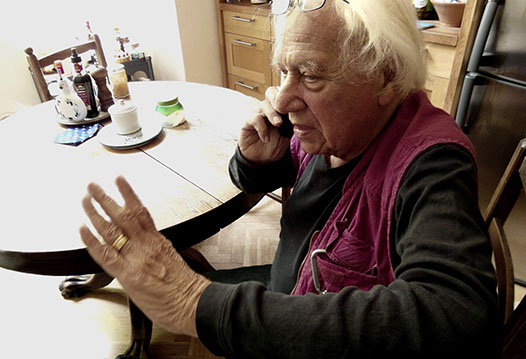 Usually artists are asked about their life and their work, what I'm going to do is give you a few quotes about these matters which I am taking from a series of interviews I did with Laura Castro, the Portuguese Art Historian and Educator.

"Things only have the value that we place upon them... Art is not the truth, but is a convincing lie. Even in a convincing lie you enforce the idea that art is about speculation, not about reality."

"I think that it is very important for the artist to ask, is this really mine? Is it authentically mine? Authenticity is a very difficult thing to describe, but after years of work you know your own mark, your own particular way of doing something, you know that only you could have made that exact work."

Born in New York city on May 6.

Working many one person and invitational exhibits. His work is acquired by many collectors, private and public and is reproduced on hundreds of record and book covers – Vanguard Records, Harper & Row, Artia Records, Music Corporation of America, Grove Press. His images promote many events in New York City including: Philharmonic Hall, Lincoln Center, Carnegie Hall, the Electric Circus and many other political and cultural presentations. His work for television appeared on the ABC National Network, NBC and WABD. Designs for the first network poster images for the public broadcasting FM station in New York.

Returns on visit to Italy.

In June moves to Italy.

One of the founders of SACI Studio Art Centers International. Appointed resident director.

Divides his time between his studios in Florence and Pian di Scò Travels widely, exhibiting frequently throughout Europe. He is a Trustee of SACI – Studio Art Centers International in Florence.

Design and realization by tsunshan.ch